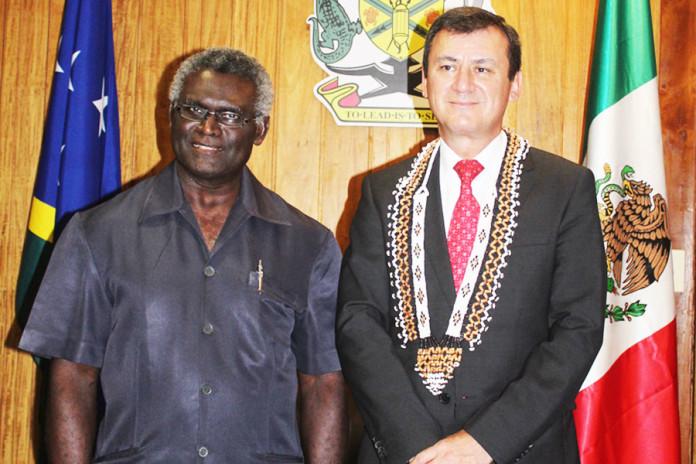 The ambassador said the Mexican government led by President Enrique Nieto emphasises economic reforms and is implementing sweeping education, energy, financial, fiscal and telecommunication reform legislations to improve competitiveness and economic growth across the Mexican economy and desires to expand its economic trade relationship to the Asia Pacific region including Solomon Islands.

“My government wants to strengthen its economic trade links with the Asia-Pacific region and has tasked me to find out from your government, the various areas that you are promoting economic trade in so that it can establish economic trade cooperation with Solomon Islands in these areas.

“Though our engagements at the bilateral level are currently insignificant, I see a lot of potential for the enrichment of our bilateral relationship through cultural exchanges and economic investment and trade.”

In response, Prime Minister Sogavare congratulated His Excellency Alvarez on his appointment as the Mexican Ambassador accredited to Solomon Islands.

He said Solomon Islands is a country with great investment potentials and that the Solomon Islands Government under the leadership of the Democratic Coalition for Change Government will be introducing legislation for the establishment of special economic zones (SEZs) in the country.

The Prime Minister said upon the enactment of the legislation, the government will be selling investment packages and the Mexican government should expect to be approached by the Solomon Islands Government on this front in the near future.

His Excellency Nieto is based in Canberra, Australia.