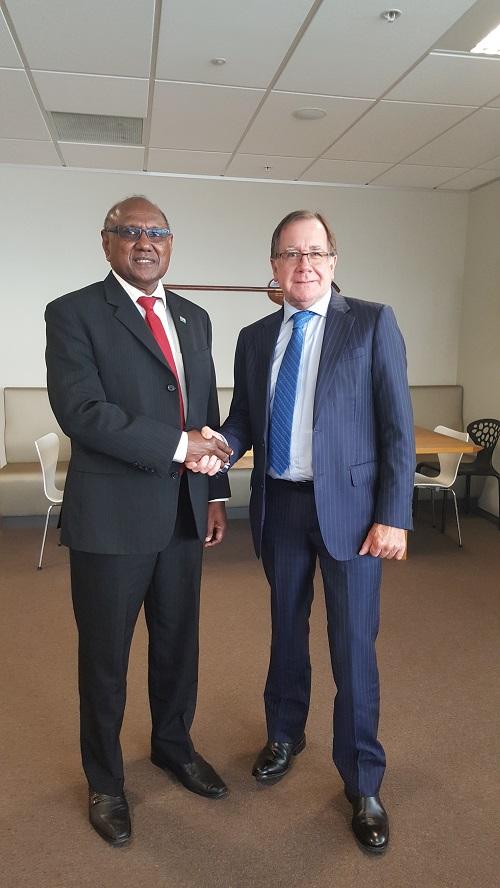 Solomon Islands and New Zealand signed a Joint Commitment for Development  (JCfD)  partnership in 2016 based on the goal of “achieving economic growth, a well-educated workforce and a safe and stable Solomon Islands”.

On labour mobility, both Ministers acknowledged the importance and the benefits of the Recognised Seasonal Employment (RSE) labour mobility scheme for both countries. Minister Tozaka highlighted the importance of the RSE labour mobility scheme and the benefits that Solomon Islands has received over the years. He also reaffirm the government’s commitment to support the scheme and work towards increasing the number of Solomon Islands workers. Minister McCully pledge New Zealand’s support to Solomon Islands to build and stregthened the capacity of its Labour Mobility Office (LMU) to support the implementation of the RSE scheme.

With regard to the airport management reforms, Minister Tozaka inform Minister McCully on the work done by the Ministry of Communication and Aviation and the Solomon Islands Airports Limited Company (SIAL). Though work is slow but there is progress made and the government remain committed in implementing those reforms. Minister Tozaka also acknowlege New Zealand for the support provided in the airport management reforms.

Both Ministers also discuss trade and investment. The New Zealand Pacific Business Council is looking forward to lead a Trade Mission to Solomon Islands in  June this year where interested and potential New Zealand businesses and investors will meet with stakeholders in the country. Solomon Islands on the other hand is seeking the assistance of the New Zealand Trade Enterprise (NZTE) to explore market opportunites for its products and exports in New Zealand.

It was a fruitfull meeting between both Foreign Ministers. Minister Tozaka also took the opportunity to acknowledge McCully as the Foreign Minister of New Zealand for the last 8 years since he will retire from politics in May this year. Foreign Minister McCully has been supportive of the Solomon Islands-New Zealand development cooperation as well as RAMSI.