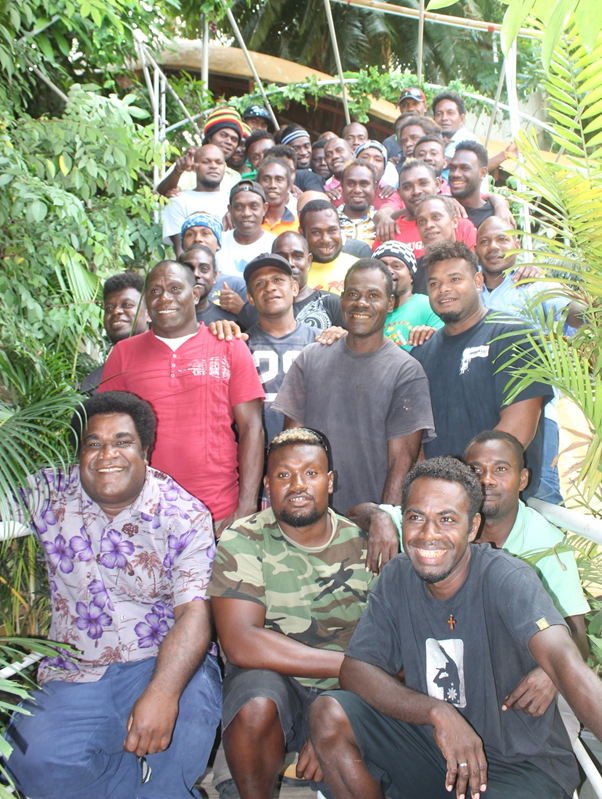 Forty seasonal workers who will be leaving for the shores of Australia under the Seasonal Workers Program (SWP),

The forty men will be working in a Citrus farm under Seven Fields Pty in Victoria, Australia.

Pre-departure briefings are an essential requirement of the SWP as this is where the workers will be advised and warned on work expectations, what to expect including but not limited to climate and behave while they are in Australia.

The briefing was also used for officials to thoroughly go through the workers contract page by page to ensure that the forty workers fully understand and appreciates the contract and what they are expected off by their employer.

During the one day briefing, the Solomon Islands Country Director for Australian Volunteers International (AVI) Ms. Jodi Cornish gave a detailed presentation on

The Director for the External Trade Department under the Ministry of Foreign Affairs and External Trade (MFAET) Mr. George Tuti also gave a strong warning to the workers saying that LMU will not tolerate nor hesitate to send back any worker(s) should they go and break any laws or rules or in breach of the visa conditions in the host country - Australia.

“Australia has its own laws and as such you have the obligation to respect and abide by their laws.

“You are also expected to respect and obey the rules that your employer has set for you.

“The LMU will not hesitate to recall you back home should you not abide by the laws of Australia,” Mr. Tuti told the workers.

The Director also strongly warned the forty men against absconding in Australia.

“Your Visa clearly states that you are going there to work only under Seven Fields Pty and if you breach this visa condition, you will be reported and deported right away by the authorities in Australia,” Mr. Tuti said.

Meanwhile RSIPF representative Mr. Davis Kusapa also warned the workers to always abide by the laws of Australia saying that they are liable to be prosecuted by the Australia Police should they break any laws while working in Australia.

The LMU’s Chief Trade Officer Mr. Jack Waneoroa also told the workers they are very fortunate to be selected amongst hundreds of other Solomon Islanders who are very keen to participate under the SWP.

Mr. Waneoroa warned the workers that they must change their mindsets and attitudes towards how they manage their time.

“I must strongly warn you workers that you must always be punctual to your jobs.

“Do not take the “Solomon time” style to Australia as this would only result in your employer reducing your wages accordingly or even sending you back to the country.

“This attitude of being late for work has always been in our blood but you must change this attitude before you step on the plane on Tuesday (Today),” Mr. Waneoroa told the workers.

Mrs. Louise Ellerton of the Australian High Commission in Honiara was also able to give a talk to the workers during the pre-departure briefing yesterday.

The Forty workers will be the second batch of Solomon Islands workers to be recruited by Seven Fields Pty to work in Australia.

The first batch of 29 workers recruited by Seven Fields have already returned to the country two weeks ago.