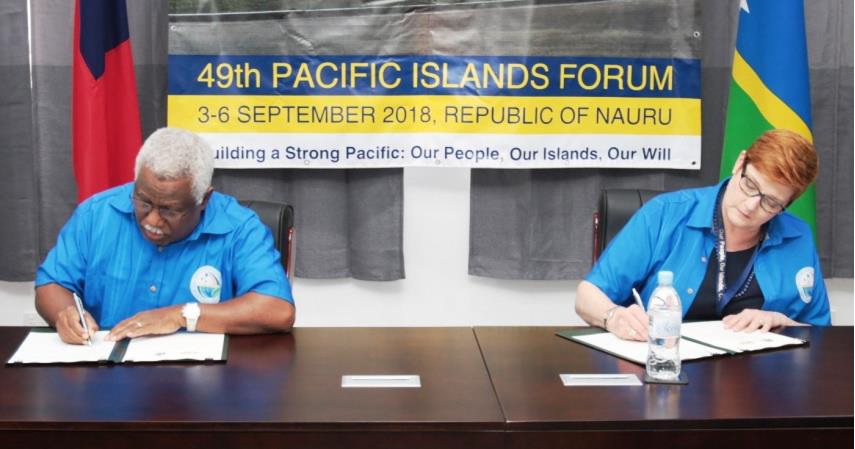 An increased number of Solomon Islands workers will soon gain valuable skills and income from working in Australia under the Pacific Labour Mobility Scheme.

Prime Minister Rick Hou and Australia’s Minister for Foreign Affairs and Trade Senator Marise Payne settled the deal by signing a Memorandum of Understanding (MOU) on the scheme at the margins of the Pacific Islands Forum (PIF) Leaders’ Summit in Nauru yesterday.

The signing of the MOU is a commitment by both countries following the meeting between Prime Minister Hou and former Australian Prime Minister Malcolm Turnbull in Canberra in July this year.

Prime Minister Hou acknowledged the Government of Australia and Minister Payne for facilitating the new deal.

“Solomon Islands have never taken full advantage of this opportunity. We can provide the work force and I am pleased that Australian employers have highly recommended workers from Solomon Islands because they are hard workers,” he said.

The Prime Minister congratulates officials from the two countries for facilitating the milestone signing - describing it as “a win-win situation for both countries”.

Meanwhile, Foreign Minister Payne said Australia was also pleased to sign off the agreement with Solomon Islands and highlighted that the signing further enhances the relationship between the two countries.

The new labour mobility scheme is an integral part of Australia’s efforts to promote greater economic cooperation with the Pacific and help strengthen the region’s economic resilience.

It provides Pacific Island workers with opportunities to gain valuable skills and income, and assists businesses in rural and regional Australia.

Media Release by Government Communication Unit – Office of the Prime Minister and Cabinet.