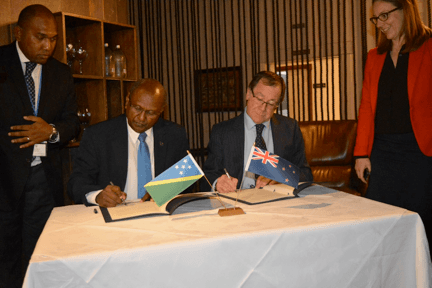 The Joint Commitment for Development  (JCFD)is the key agreement between both countries that sets the shared vision and commitment of both governments on the priority focus areas of development assistance and cooperation.

The revised Joint Commitment is based on the goal of “achieving economic growth, a well-educated workforce, and a safe and stable Solomon Islands”.

The four priority areas under the revised JCfD are economic growth, quality education, safety and stability and partnerships. The finer details of the development assistance will be discussed by officials of both countries in the implementation of the various programmes and projects that fall under those four key priority areas.

The recent announcement by New Zealand of NZ$7.7m (SB$42m) to support the Aviation sector which includes the 2nd phase of the Munda Alternative International Airport as well as the upgrading of the 3 domestic airports in the country is directly linked to economic growth and their commitment to support the tourism industry.

Minister Tozaka was on an Official visit to New Zealand as Guest of the New Zealand Government after attending the Forum Trade Ministers’ meeting in Christchurch.

During his visit, Minister Tozaka held bilateral meeting with the Minister of Police, Hon Judith Collins, MP and the Minister of Immigration who is also responsible for RSE, Hon Michael Woodhouse.

Minister Tozaka and delegation also held discussions with Mr Anton Ojala, Manager Pacific Division and Mr David Nicholson, Director for Pacific Development Division and other senior officials from the Ministry of Foreign Affairs on the PACER Plus, Post-RAMSI, Joint Commitment for Development and other bilateral issues of importance.

The Minister and delegation will arrive back in the country this weekend.