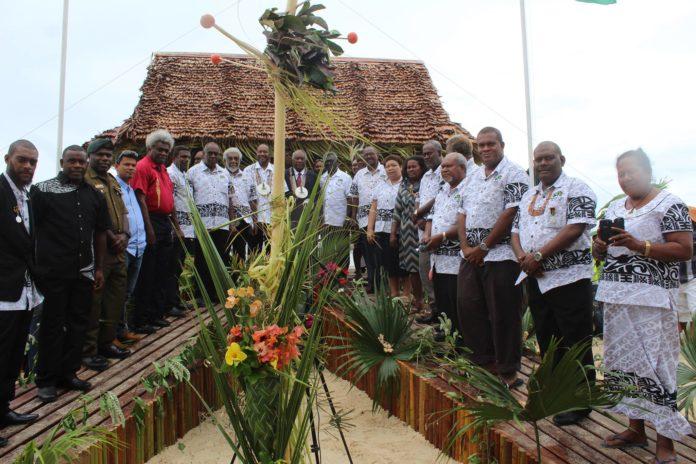 Vanuatu President His Excellency Baldwin Lonsdale and members of the Vanuatu Council of Ministers also attended the signing, as were four Cabinet Ministers of Solomon Islands.

The historic Treaty concluded the wish of the two Governments to settle upon a maritime boundary line in an area of the sea where their 200-mile zone overlap, demarcated along resolved coordinates calculated based on the strict median approach dividing the two sovereign nations, between the northern region of the Republic of Vanuatu and the southern regions of the Solomon Islands.

The Treaty builds on from a Memorandum signed in 2015 of both countries made with respect to their collective boundaries of delimitation.

Acting Permanent Secretary of Ministry of Foreign Affairs and External Trade, Joseph Ma’ahanua said the signing of the Maritime Boundary Treaty concludes negotiations that started way back in 1984 to define maritime boundaries between Solomon Islands and Vanuatu.

“These resumed again in 1987 and 2011 respectively but no agreement was reached on both occasions. It was during negotiations that took place at the end of 2015 that saw a break through, where both sides with assistance and support by the SOPAC Unit of the Pacific Community, were able to reach convergence and agree on the coordinates and therefore a settlement reached leading to the Treaty that was signed at Mota Lava in the Torba Province of Vanuatu”.

The new demarcation of the boundary will recognize and resolves to protect the similar cultures that existed on the border communities of both countries and the cultural exchanges and trade that existed on its history, and ensuring the continuity of those practices as the means to reinforce the spirit of Melanesian brotherhood.

The signing of the Maritime Boundary Treaty concludes discussions on boundary definitions and demarcations but more work will need to be done between the two countries to deal with responsibility for management of security issues, movement of movement of peoples, goods and the like across the border and management and sharing of resources that may exist along the border area.

The signed Treaty also paves the way for the two neighbouring Melanesian countries to work towards furthering the close and friendly relations which they have enjoyed over the years.