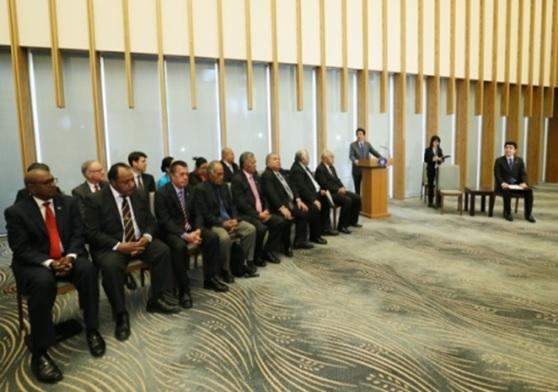 Solomon Islands was among the 16 members of the Pacific Islands Forum that did attend the 3rd Interim Pacific Island Leaders Meeting (IPALM) which was held in Tokyo on 17th January, 2017. The Solomon Islands delegation was headed by Hon. Milner Tozaka- Minister for Foreign Affairs and External Trade; accompanied by the Permanent Secretary (sg) for Foreign Affairs- Mr. Joseph Maáhanua and Assistant Secretary (sg) for Asia Branch- Mr. Joseph Atkin Tada

The Interim Pacific Island Leaders Meeting (IPALM) was a ministerial forum between members of the Pacific Islands Forum (PIF) and the government of Japan; seeking to discuss issues of common interests. IPALM was an avenue initiated purposely to review previous PALM meetings and prepare by way-forward for the next summit proceedings (PALM).

This year marks the 3rd IPALM Ministerial meeting that discusses the 2015 Pacific Island Leaders Meeting PALM commitments; hence its implementation; and the preparation towards the forth-coming PALM Leaders meeting which will be held in 2018 in Japan.

During the meeting proper, key discussions were centred on Japan’s assistance to the Pacific Islands countries since 2015 worth around 61 billion yen which it hopes to increase prior to 2018.

Deliberations were also exchanged on the area of people-people exchange which saw approximately 3,200 students being exchanged thus far between Japan and USP since 2015. On other areas of assistance Japan continue to support the Pacific Island countries on disaster risk reduction both at regional and international level through the United Nations.

Pacific Island participant also thank the government of Japan for its assistance on climate change mitigation and adaptation processes. The highlight of the meeting on climate change was the focus on the Global Climate Fund (GCF) of USD165 million which was provided to Small Island Developing States.

Both parties also exchange views on the importance of cooperation towards the implementation of the 2030 Agenda for Sustainable Development. The meeting further discuss the ratification of the Paris Agreement by Parties to the United Nations Framework Convention on Climate Change; hence its implementation.

The meeting also had the chance to share views on trade and business environment as crucial to the partnership between PIF members and Japan; noting in particular the tourism potential in the Pacific.

Fisheries issues were also the centre piece for discussion between parties; by which the PIF delegation did call on Japan for their cooperation within the Western and Central Pacific Fishery Commission (WCPFC). Discussion were deliberated on the need for a well-balanced legally binding instrument toward conserving marine resources beyond national jurisdiction in full compliance to the United Nation Convention on the Law of the Sea (UNCLOS)

Peace and Security issues in the region was also discussed in light of the need to uphold free and open maritime order with the waters of the Pacific as enshrined with the jurisdiction of international law; henceforth not to use force or coercion in settling disputes.

The meeting did end in good spirit with both parties seeking to cooperate where possible both at regional and international level. The meeting was closed with a press conference announcing the next PALM meeting (PALM 8) to be held in Iwaki Fukushima; Japan from 18th – 19th May, 2018.