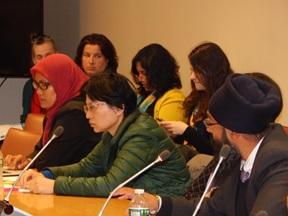 “We Are Still Swimming Against The Tide But We Will Get There.” Ethel Sigimanu Tells a UN Panel Discussion on Status of Women.

Here, in a side event of the sixty-first session of the Commission on the Status of Women (CSW) held at the New York-based United Nations, Mrs Ethel Sigimanu, Permanent Secretary for Women, Youth and Children Affairs, was referring to the issue of violence against women in Solomon Islands.

Mrs Sigimanu told a gathering of about sixty participants, mainly from the Asia/Pacific region, that thanks to the Solomon Islands Family Health Safety Study (SIFHSS) adopted in 2009, there is now widespread awareness and serious concerns about the prevalence and patterns of violence against women in Solomon Islands.

She cautioned however that while there is increasing political will at the very top, much remains to be done nationwide for as long as domestic violence continues there can be no tangible and meaningful development in and across the country.

“We are still swimming against the tide, but we are riding on the waves that the Solomon Islands Family Health and Safety Study has produced. With determination and courage, we will get there!”  Mrs Sigimanu, also national coordinator of SIFHSS, concluded much to the applause of her attentive audience who in the last two weeks were considering the most effective ways in which to bring about change for women in the world of work.

The last two weeks’ 61st Session of the Commission on the Status of Women drew the attendance of 162 Member States, including 89 representatives at the Ministerial level.   More than 3,900 representatives from 580 civil society organizations descended on New York from 138 countries, attesting to the growing strength and unity of women’s voices around the world.