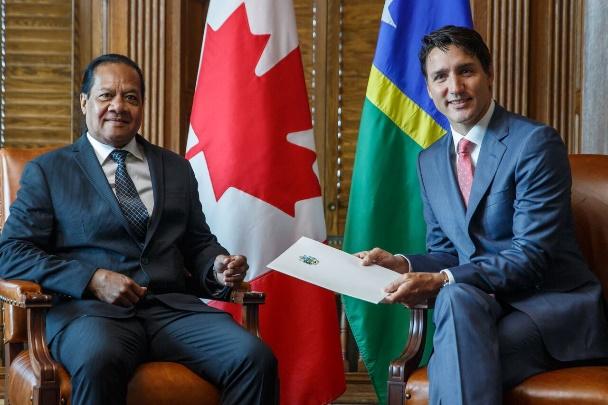 Solomon Islands’ Ambassador to the United Nations and the United States of America, Mr. Robert Sisilo, has completed his cross-accreditations when he presented his Letter of Appointment to the Prime Minister of Canada, Mr. Justin Trudeau, on Monday this week. The Letter, signed by Prime Minister Sogavare, appoints Mr. Sisilo, based in New York, as Solomon Islands’ non-resident High Commissioner to Canada.

Climate change and labour mobility featured prominently in the 15-minute discussions after the presentation. Mr. Sisilo commended Mr. Trudeau and his Government for their unwavering commitment to the Paris Agreement and their financial support to the Green Climate Fund and other climate change related funds. Solomon Islands has benefitted from the Green Climate Fund in the financing of Tina Hydro to the tune of around $90 million.

“For us climate change and sea-level rise are the biggest threats to our security and we therefore pin our hopes for any prospect of survival on the Paris Agreement and the commitment of all countries that have signed it to implement it to the full.” Mr. Sisilo stressed. 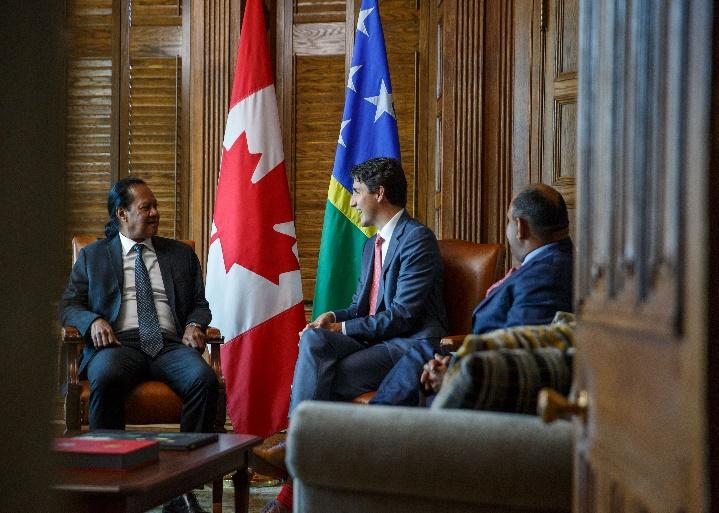 Deep in discussions while Hon. Consul General Dwivedi looks on

Prime Minister Trudeau, in acknowledging the very warm relationship between the two countries, assured Mr. Sisilo of Canada’s commitment to the Paris Agreement and was aware of the challenges Solomon Islands and other island countries face due to rising sea levels caused by climate change and global warming.

On labour mobility Mr. Sisilo told the Prime Minister that two Solomon Islanders have just been granted their work permits to work in Canada followed by Canadian Permanent Residency under the Immigration nomination program between Canadian International Training & Education Corp (CITREC) and Guadalcanal Province (GP). Another six CITREC-GP graduates are expected to also get their work permits shortly.

“In a country like mine where unemployment is very high, especially among our youth, a labour scheme such as this would really go a long way in making a difference, and for the better, the lives of our young men and women. I hope the numbers will keep increasing.” Mr. Sisilo said.

The export of root and other crops, particularly cassava and ginger was also discussed and further explored with officials from the Canadian Food Inspection Agency which will soon publish a list that will outline export requirements into Canada.

The Solomon Islands’ Honorary Consul General to Canada, Mr. Ashwant Dwivedi, who accompanied Mr. Sisilo in all his appointments, will discuss these matters further with the relevant government officials and come up with some recommendations on how best to proceed with labour mobility and exports of SI agricultural products to Canada. This will include finding employers and buyers for SI labour and products respectively in Canada.