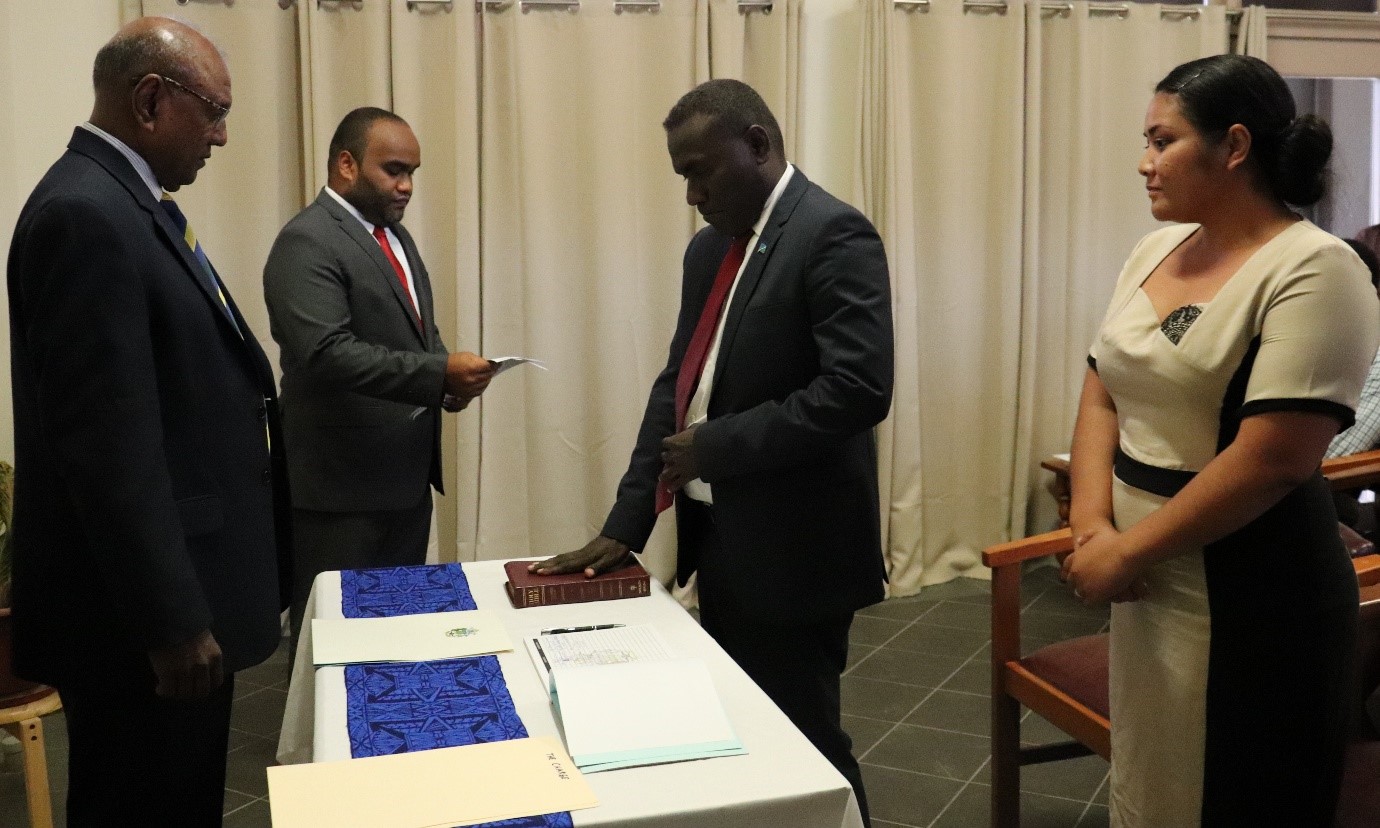 Solomon Islands Ambassador and Permanent Representative to the United Nations Office in Geneva and the World Trade Organisation has been commissioned on Friday 24 August.

His Excellency Barrett Salato was commissioned by the Minister of Foreign Affairs and External Trade Hon Milner Tozaka at the MFAET office.

Before being commissioned, H.E Salato had been the country’s Charge De Affairs to the Mission in Geneva, Switzerland for the past three years.

H.E Salato is a career Diplomat having worked at the MFAET as the Director of External Trade before taking up the Charge de Affairs post.

During the commissioning the Minister of MFAET Hon. Tozaka expressed his confidence in H.E Salato taking up the post and also reminded him of his foremost task which is to represent Solomon Islands at the UN and WTO headquarters.

“As the Permanent representative of Solomon Islands to the United Nations office in Geneva and the World Trade Organization your task is, first and foremost, to represent and promote the interests of the Government of Solomon Islands.

“The Government and People of Solomon Islands expect you to provide sound advice and deliberation on all matters during your tenure of office.

“Your full commitment is therefore expected,” Minister Tozaka said in his speech.

Minister Tozaka said that the choice for H.E Salato as head of the mission in Geneva is no accident.

“I am confident that you are eminently fitted, both in your personal qualities and experience in the affairs of state for the charge the government has entrusted on you and to which you have now pledged your allegiance,” Minister Tozaka said.

In his reply H.E Salato said that it was a great honour and privilege to be selected as Ambassador and Permanent representative to the UN and WTO.

“As our country’s top diplomatic representative in the international community in Geneva, I pledge to you, to do all that I can to represent our government and the interests of Solomon Islands in the discharge of my duties and responsibilities expected of me.

“I will do my utmost best to pursue and defend the interests of our country in the field of Trade, development, human rights and other areas of interests to Solomon Islands,” H.E Salato said.

H.E Salato will be the second Ambassador and Permanent representative to the UN and WTO.

He is from Marovo in the Western Province and is married with 3 Children.