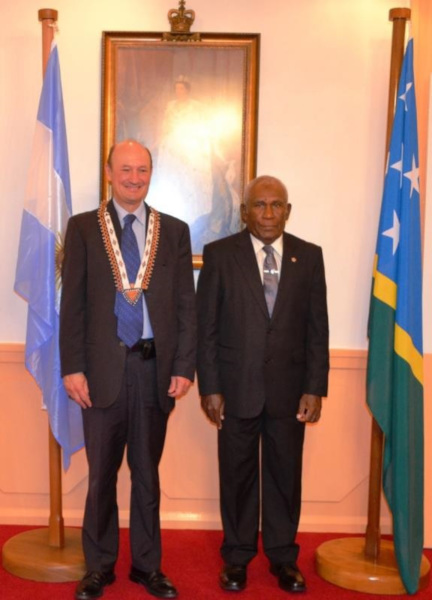 The Ambassador of the Republic of Argentina, H.E. Hugo Javier Gobbi has presented his letters of credence to the Governor General Sir Frank Ofagioro Kabui at Government House on Thursday 4th October.

“This accreditation is an affirmation of our diplomatic relation established not long ago. It is the mark of friendship between us, two sovereign states,” Sir Frank said when accepting Ambassador Gobbi’s letter of credence.

Sir Frank also conveyed his best wishes to His Excellency, President Mauricio Marci and wished the Government and people of the Argentine Republic prosperity and peace.

“We are miles apart in terms of distance on the map. Despite this fact, we are all part of humanity. There are numerous differences between us but this one common factor does bind us together as part of the world community,” Sir Frank said.

Sir Frank also informed the Argentine diplomat that Climate change is a major issue in the world today that has affected every country in one way or another.

He said Solomon Islands, for that matter, is no exception as the rise of sea level is of major concern.

“The atolls, being the low lying island communities, are directly in the firing line. For the larger islands, the erosion of the coastlines is the major concern,” Sir Frank said.

He also highlighted that the Paris Agreement signed in 2017 is a step in the right direction on the issue of climate change saying Solomon Islands is waiting to see how its implementation plays out during the course of time.

Meanwhile, Ambassador Gobbi has expressed his gratitude for the opportunity to represent his country in Solomon Islands and assured Sir Frank that he will endeavor to strengthen the links of friendship that already existed between the two countries.

“Solomon Islands can count on having a loyal friend in Argentina. We will keep working btogether to strengthen this line of work,” Ambassador Gobbi said.

Sir Frank assured the Argentine diplomat that Solomon Islands is ready to give assistance as and when required during his term in office.