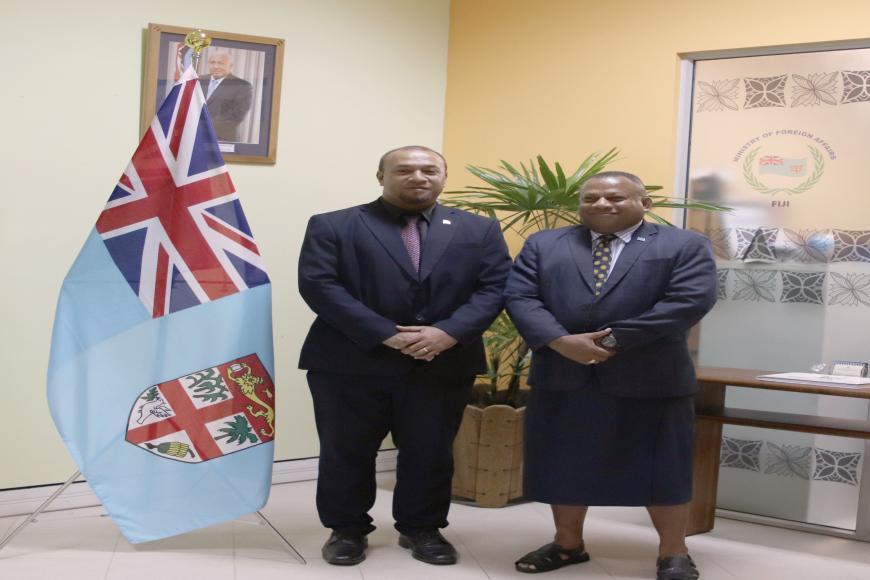 The Solomon Islands High Commissioner to the Republic of Fiji, His Excellency, Mr. William Soaki made a courtesy call on the Fiji Minister for Foreign Affairs, Defense and National Security, Hon. Inia Seruiratu on Wednesday 20th February 2019, at the Ministry of Foreign Affairs Headquarter in Nasese, Suva.

The courtesy call was an opportunity for His Excellency to formally meet Hon. Seruiratu since he took up the Foreign Affairs portfolio a couple of weeks ago and also comprehensively discuss bilateral and multilateral issues of common interest.

The connection between Solomon Islands and Fiji transcended long before diplomatic relation was established. In the 1870s, Solomon Islanders were brought to Fiji to work in the coconut plantations and sugarcane farms. In the 1940s, Fijian soldiers were involved in WWII in the battle of Guadalcanal. In the 1970s Fijian missionaries traveled to spread Christianity in Solomon Islands and more recently Fiji play a significant role in RAMSI. The close relationship was further strengthen through the 2010 Memorandum of Understanding (MoU) on Development Cooperation.

There is mutual commitment between both countries to advance the relationship, and ultimately continue to progress cooperation and engagement bilaterally, regionally and beyond.

Minister Inia highlighted that Solomon Islands and Fiji will ensure and recognize the positive impact of such development cooperation that will continue in the political, economic, and security sector of both countries and their contribution to the challenges faced in the Pacific region. As neighbors we have responsibilities to each other to make sure we progress into the future.

Both the Minister and His Excellency discussed the prospect of having more regular dialogue and collaboration between senior officials of both countries in developing means to further strengthen the relationship.

His Excellency Soaki is looking forward to broadening the bilateral engagement with Fiji through South-South Cooperation and the sharing of expertise on cross-cutting developmental issues. He also acknowledges the leadership role of Fiji during COP23 and will ensure to work closely with the Minister of Foreign Affairs.

Solomon Islands established diplomatic relations with the Republic of Fiji on 28 July, 1978.