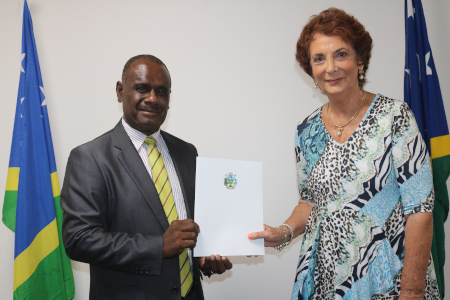 Appointment of US Honorary Consul to Solomon Islands

On 26th June 2020, the Minister of Foreign Affairs and External Trade, Honourable Jeremiah Manele, presented an Exequatur to Ms Keithie Saunders formally recognising her as the United States Honorary Consul to Solomon Islands for the next 18 months.

Minister Manele congratulated Mrs Saunders and wished her well as she continues to undertake her role in enhancing the bilateral relationship between Solomon Islands and the United States of America in areas of mutual interest.