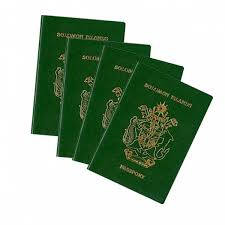 As of mid-September 2020, Solomon Islands citizens in Australia can now initiate their renewal of passports at the Consulate General Office in Brisbane. Immigration officials, Mr. Johnson Oge and Mr Richard Manuroho, flew in to Brisbane on the 24th August to set up Immigrations Mobile Enrolment Unit (MEU) in the Consulate.

Mr Manuroho stated that the MEU set up is used to collect an applicant’s details including fingerprints, passport photo, and signature, which are security features for Solomon Islands passports. Once collected the data is sent to Honiara for printing passports which are then returned to the Consulate to distribute. The establishment of the MEU at the Consulate General Office in Brisbane makes it the first to process Solomon Islands passports offshore.

The Immigration officials inform that at this stage the stand alone process will have a waiting period and advised that to avoid any issues, passports must be renewed months in advance before its expiry date.

Previously, all Solomon Islands citizens abroad had to return to Honiara to replace or renew their expired passports.  However due to COVID 19, and the subsequent restrictions on international flights, this was not possible. This has prompted the Government to send Immigration officers to Brisbane to set up the MEU. More than a hundred citizens have registered their names with the Solomon Islands High Commission in Canberra to renew passports.  Most are permanent residents while others are studying and working in Australia.  Without valid passports they cannot renew their Australian visas and will therefore be living illegally in Australia.

Australia hosts Solomon Islands largest international diaspora of about 3,000 living in Queensland, New South Wales, Victoria and other states in Australia.  This includes the 1,000 Solomon Islands workers serving under the Seasonal Workers Program and the Pacific Labour Scheme and students studying in high schools, technical institutions and universities.  They have contributed to the country’s social and economic development through remittances, family support and charities.

Solomon Islands High Commissioner to Australia, His Excellency, Mr Robert Sisilo, thanked the Government of Australia and the Queensland authorities for facilitating the smooth entry of the two immigration officials into Brisbane.  Mr. Sisilo inform that the High Commission and the Consulate General office will liaise with the Solomon Islands communities in Australia regarding the availability of the MEU and advise that those concerned do abide with all interstate processes and exemptions requirements to be able to travel to Brisbane to renew their passports.

Meanwhile, Solomon Islands citizens in Australia have thanked the government for the timely outreach by immigration officials to process their passports and also for the support provided by the High Commission in Canberra and the Consulate General Office in Brisbane.

The Solomon Islands Consul General in Brisbane, Mr Kereta Sanga, further inform that that the two Immigration Officials are currently undergoing 14 days quarantine before commencing their work at the Consulate Office in Brisbane.