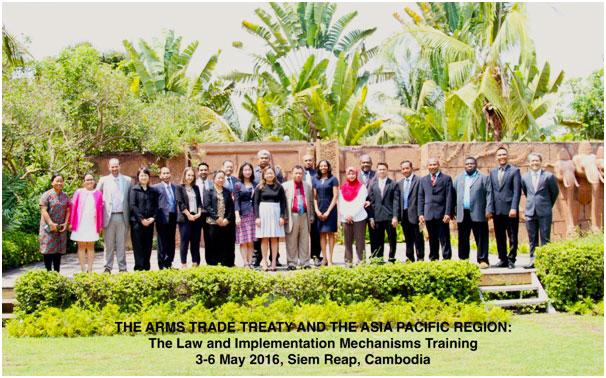 Solomon Islands recently participated in a four day workshop on Arms Trade Treaty (ATT) in Siem Reap, Cambodia on 3-6 May.

The workshop which was organized by Control Arms, Nonviolence International Southeast Asia (NISEA) and the Pacific Small Arms Action Group (PSAAG) with funding support from the Australian Permanent Mission to the United Nations was attended by the Undersecretary to the Ministry of Police and Correctional Services Mr. Marktas Forau and Deputy Secretary to the Ministry of Foreign Affairs and External Trade Mr. William Soaki.

The workshop was aimed at informing countries that are yet to sign the Arms Trade Treaty (ATT) on their obligations when they become a party and also the benefits from the treaty.

ATT is a multilateral treaty that regulates the international trade conventional weapons.

The ATT is an attempt to regulate the international trade of conventional weapons for the purpose of contributing to international and regional peace, reducing human suffering, and promoting co-operation, transparency and responsible action by and among states.

Solomon Islands is yet to sign or ratify the ATT.

During the workshop, participating countries agreed that International and regional support and cooperation is necessary to make the implementation more effective and that Learning, exchange of experiences and knowledge, and sharing of information and best practices between and among countries in the Asia Pacific region should be supported.

They also noted the importance of the establishment of the lead agency as the contact point for the ATT and Interagency cooperation among law enforcement agencies, regulators and all other agencies involved in the implementation is necessary for the successful implementation of the ATT.