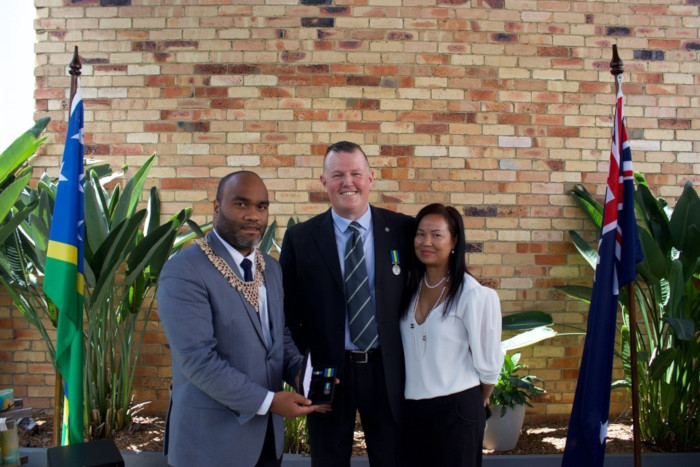 During Mr Johnstone’s deployment he was seriously injured while rescuing two locals attacked by an armed mob in Honiara. Mr Johnstone sustained serious injuries to his arms, head, and legs, and was said to have saved the lives of the two men who were attacked on that day. Mr Johnstone eventually had to be discharged from RAMSI because of his serious injuries.

In awarding the ILEC medal Mr Sanga said Mr Johnstone’s actions truly exemplified RAMSI’s motto ‘Helpem fren’ and it was an honour to present the medal recognising his sacrifice and service to the Government and people of Solomon Islands.

Mr Johnstone in receiving the award said that it brought ‘closure’ in his time with RAMSI and despite his experience he always felt the country had ‘hope’ for a better Solomon Islands especially in the Children he met during his time in the country.

The brief ceremony was attended by Mr Johnstone’s family, Pacific Consular Corps in Queensland including, Nauru and Papua New Guinea, DFAT, and members of the Solomon Islands Community in Brisbane.