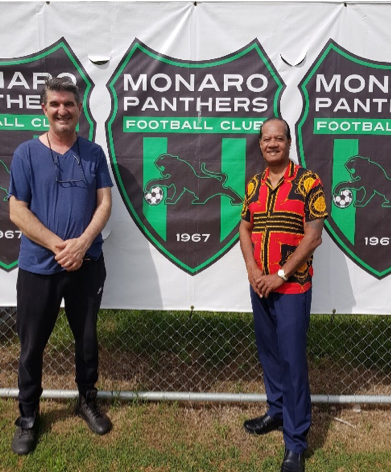 The “Pacific Step-Up” is one of Australia's foreign policy priorities highlighted in its 2017 Foreign Policy White Paper and 2016 Defence White Paper as of fundamental importance. This is to engage with Solomon Islands and other Pacific Island Countries at a new level, launching a new chapter in their relations.  Hence the Pacific/Aus Sports Initiative.

“This is where it should have started.  I just cannot afford to let it go so here I am to see how we can revive it.” Mr. Sisilo told Mr. John Santolin, Coordinator of the women’s team.

Santolin was keen to work closely with Solomon Islands to boost football partnership when borders reopen and the situation normalises. He suggested exchange programs and team visits in the future between the club and selected teams from Solomon Islands.

“We will be very happy to welcome football teams from Solomon Islands for friendly matches with our teams using our facilities and stadium.  And even consider recruiting them to play for Monaro Panther.” Mr. Santolin told Mr. Sisilo while touring their training ground and facilities.

“Solomon Islands is a fooball/soccer country and we will certainly take up your invitation.” Mr. Sisilo replied bearing in mind the Pacific/Aust Sports Progamme launched in early November in Apia, Samoa.