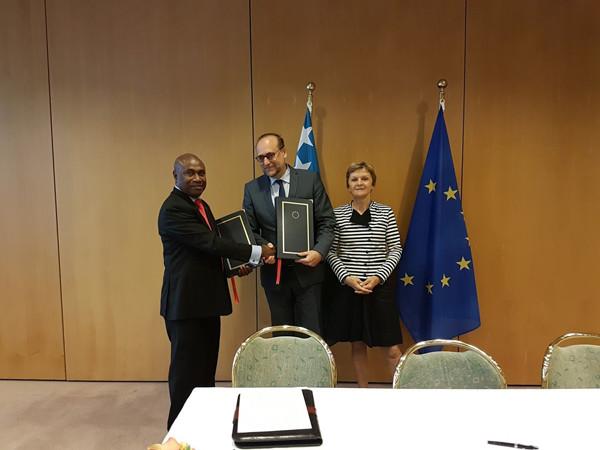 Solomon Islands Ambassador to the European Union, HE Mr Moses Kouni Mose and the Ambassador and Permanent Representative of the Slovak Republic (representing the current EU Presidency) HE Mr Peter Javocyk, and Ms Belinda Pyke, Director for Migration, Mobility and Innovation, DG-Migration and Home Affairs of the European Commission signed the agreement on Friday 7th October in Brussels.

The Agreement marks a new chapter in the SI-EU relation, which signifies mutual trust and maturity in the partnership.

“The operationalization of this Agreement would pave the way for our peoples to move freely between our countries to promote people to people connections, cultural exchanges, tourism, trade, investment and business opportunities,” Ambassador Mose said.

The Agreement which comes into effect a day after it was signed, permits Solomon Islands nationals or citizens to travel visa free and stay in a territory of a European Union member state (fully applying the Schengen acquis) for up to 90 days over any given 180-day period.

Similarly, citizens of EU members can travel and stay in a territory of Solomon Islands for up to 90 days over a given 180-day period.

Other Pacific Island Countries which have already signed and benefited from a similar visa waiver agreement with the EU are the Federated State of Micronesia (FSM), Kiribati, Marshall Islands, Palau, Samoa, Timo-Leste, Tonga, Tuvalu and Vanuatu.

The SI-EU short-stay visa waiver agreement does not cover Ireland and the United Kingdom.