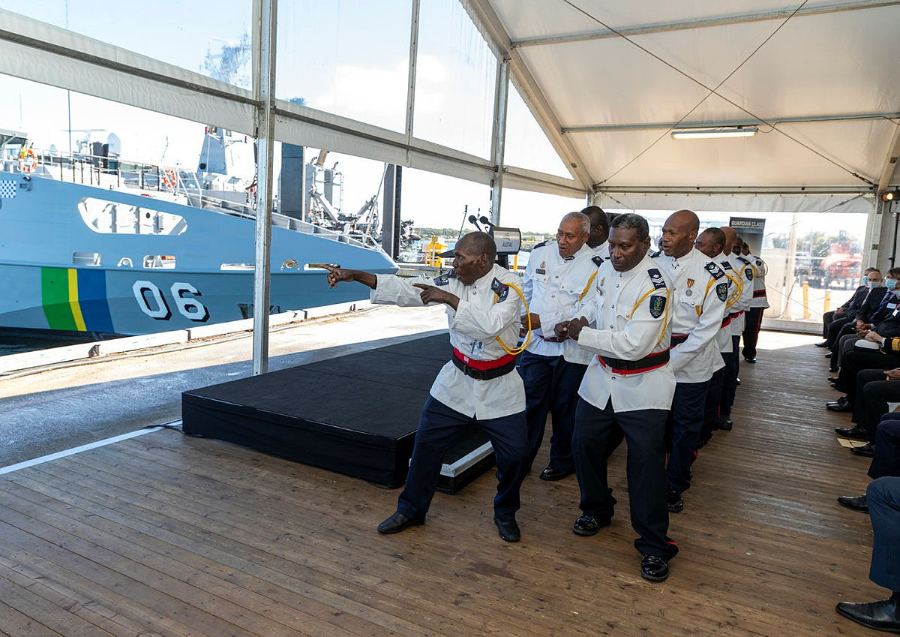 Solomon Islands High Commissioner to Australia, His Excellency, Mr. Robert Sisilo, was full of praises of the Captain and Commanding Officer and the 20 crews of the Royal Solomon Islands Police Vessel (RSIPV) Taro when he accepted and received the new patrol boat from the Government of Australia at the Handover Ceremony held on Friday last week in Perth, Western Australia.

“To our 21 guardians of the seas, who are here today, my special greetings to you all and a big thank you for the way you've conducted yourselves, the training that you've undertaken and the serious professionalism that you've shown.” Mr. Sisilo said.

High Commissioner Sisilo remind the 21-strong naval crew that, “it’s now a Solomon Island’ ship”, and he congratulated all the Officers and their families for all their hard work and support.

“ Through you Captain and crew of the RSIPV Taro, I thank your families and friends for their support and love that have enabled and will continue to enable you serve our beloved country and region day in and day out.  This ceremony is as much as is for them as it is for you.” Mr. Sisilo said.

Mr. Sisilo was very confident that the crew will live up to the task required of them to keep and take care of the ship and live up to its character.

“Having watched live the RSIPV Auki, under your command, leaving Point Cruz on 8 March for the last time after serving in our and Pacific waters for 30 years, I can only imagine what the reception will be like when RSIPV Taro, under your command, finally arrives and berths at the Mbokona Bay Patrol Boat Base in Honiara.” Mr. Sisilo said.

As permanent neighbours with a common border, Australia and Solomon Islands have shared interests and a shared history. For there are more that binds both countries together collectively in the area of regional security..

Mr Sisilo told senior naval officers, government officials, the 21 officers and crew of Taro and Solomon Islanders gathered at the Handover Ceremony that the partnership between Solomon Islands and Australia is further strengthened by the Australian Government’s commitment to build a police outpost and a patrol boat berth on the Western border. “This will enhance our three-phased approach to strengthen surveillance, response capability and protection to ensure the integrity of our sea borders”. Mr Sisilo said.

The RSIPV Taro is expected to arrive in Honiara in June.