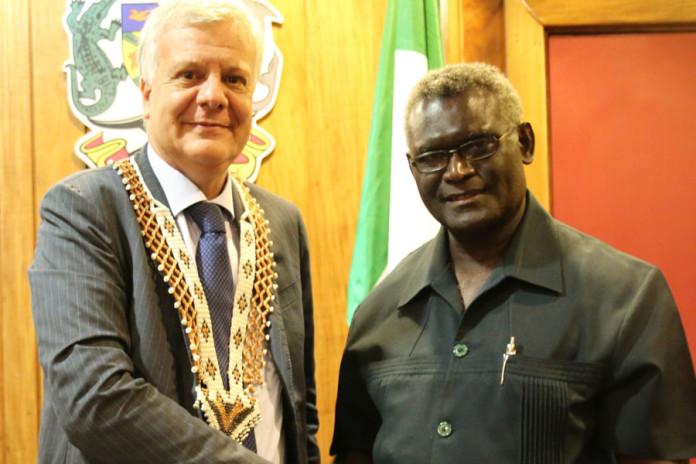 Minister Gian is visiting Solomon Islands as part of his Pacific Tour to see firsthand the impacts of climate change in the region and to explore how Italy could assist small Island States to implement the historic Paris Agreement to reduce global temperatures to 1.5 degree Celsius.

Italy was one of the leading European countries that signed the Paris Agreement last year and is keen to assist small island states including Solomon Islands to implement the agreement, particularly, in providing technology to support renewable energy projects in the island states.

Prime Minister Manasseh Sogavare applauded the Italian Government for its leadership role towards the development and subsequent signing of the Paris Agreement by world leaders in December 2015.

He told the visiting Italian delegation that for small island states like Solomon Islands, “climate change is our greatest enemy that threatens our lives every day”.

“For us, it is a matter of life and death and that is why we talked about it with great passion,” Sogavare said.

For Italy, the implementation of the Paris Agreement to reduce global temperatures to 1.5 degrees is an important agenda for their government and they will continue to join the fight against climate change.

Minister Galletti said the Italian Government has already allocated more than 2 million Euros to fund multi-lateral projects around the world in the fight against climate change, especially, in the implementation of the Paris Agreement.

On bilateral issues, the two leaders discussed a number of areas of common interest including future cooperation, security, the sustainable development goals and world peace.

Prime Minister Sogavare said Solomon Islands has noted Italy’s candidature for a non-permanent seat in the UN Security Council in 2017 saying Solomon Islands will inform Italy of its support in due course.

Minister Galletti said his visit underlines the current cordial friendship and for the future cooperation between the two countries.

The Minister and his delegation also held talks with the Solomon Islands Minister for Foreign Affairs and External Trade Milner Tozaka.