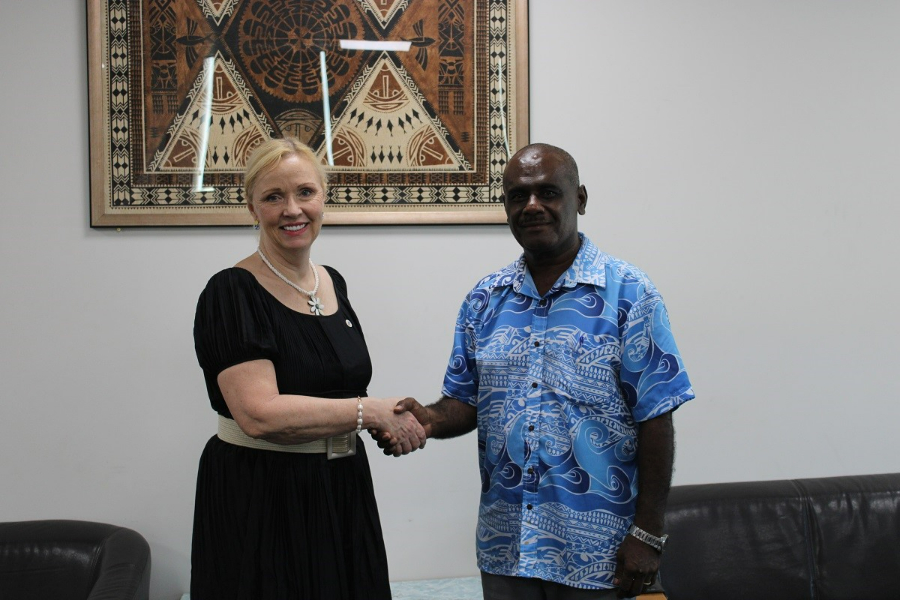 MINISTER of Foreign Affairs and External Trade, Hon. Jeremiah has met with a team from the UN Inter-Agency Task Force on Support for Graduation (IATF) to discuss the Solomon Islands request for a three-year deferment of its proposed graduation as a Least Developed Country in December 2024.

Minister Manele and senior officials from MFAET and the Ministry of National Planning and Development Coordination met with the Chair of the IATF and Director of the United Nations Office of the High Representative for the Least Developed Countries (UN-OHRLLS), Ms. Heidi Schroderus-Fox and Programme Management Officer of OHRLLS, Tomas Gonzalez in Honiara on Monday 23rd January.

Manele used the meeting to emphasise Solomon Islands vulnerability through ongoing environmental challenges with flooding and earthquakes, and the recent COVID-19 pandemic and civil unrest in 2021 which has set the country’s national economy back.

He said as an archipelago, the distribution of development across the country remains an ongoing challenge.

He also mentioned trade development as an issue needing more infrastructure support, this is despite deep progress with trade market access achieved through trade agreements with the Pacific through PacerPlus, the EU, United Kingdom, Melanesian Spearhead Group and China.

“Should Solomon Islands graduate out of the LDC status, trade will be an important tool to sustain the country’s economy,” he stated.

It is also hoped that with deferment, Solomon Islands would also have time to develop a LDC transition strategy to guide the Government through the transition period, a document ideally aimed at mitigating the social and economic impact that Solomon Islands face after graduation.

The Minister thanked the UN team for their response towards Solomon Islands request in 2022 regarding LDC deferment, and appreciate the findings of the UN Technical Team that was here in December 2022.

He said Solomon Islands stands ready to work with the UN process of deferment and would like to see the Committee for Development Policy (CDP) justify the request for deferment.

He further stressed that Solomon Islands Government through the Ministry of National Planning and Development Coordination will continue to collaborate with CDP going forward to work on the justification for deferment.

In response, Chair of the IATF, Ms. Heidi Schroderus-Fox thanked the Foreign Minister on the request for deferment of Solomon Islands LDC graduation and the information shared, and promised to convey them to the attention of the Task Force.

She said the Task Force will collaborate with the Solomon Islands Government to ensure there is a smooth transition for the country.

The UN IATF team is visiting the Solomon Islands from 23rd – 27th January, to conduct a series of meetings with stakeholders. Their visit is in response to a request from the Government for UN to support and assist Solomon Islands assess its preparedness and to provide technical capacity with developing a smooth transition strategy.