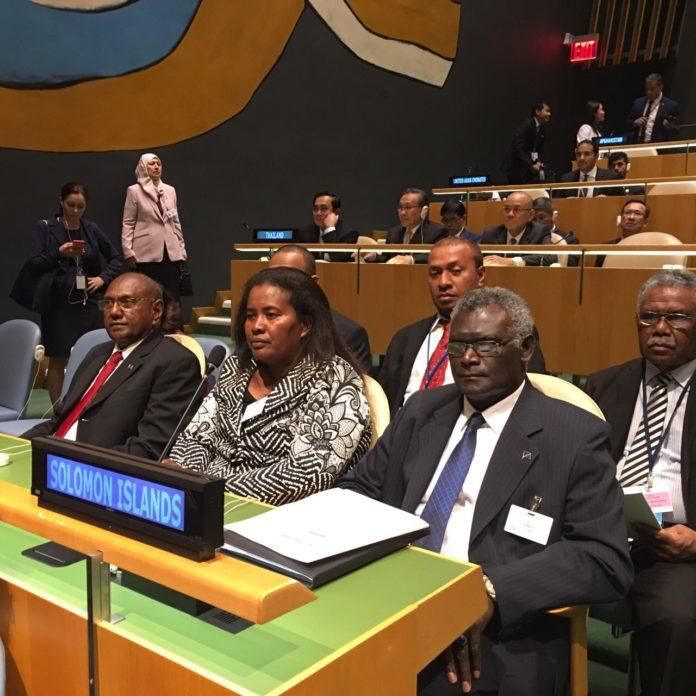 Minister of Foreign Affairs and External Trade, Hon Milner Tozaka, has called on the world’s major emitters to significantly reduce their emissions and avail dedicated financial and technical support to address the needs of climate change-displaced people.

The Minister made the call when he chaired the 71st United Nations General Assembly General Debate session on ‘Climate Displacement and Dignity: The Needs of the Most Vulnerable Countries’ on Wednesday 21st September.

The session focussed on displacement induced by climate change, which is not covered in terms of definition and focus by existing international conventions such as the Refugee Convention and even the ‘Loss and Damage’ clause of the Paris Agreement on Climate Change. The Refugee Convention is the key legal document of international refugee protection. The Convention defines who is a refugee and the kind of legal protection, other assistance and social rights refugees should receive from the states that have signed up to it.

Whilst the Minister Tozaka acknowledged the existence of parallel initiatives at the multi-lateral level which place importance on addressing displacement including those induced by climate change, he said the inadequacies of existing international conventions and arrangements to address the issue of people displaced by climate change calls for rationalisation of processes under the ambit of the Paris Agreement and the United Nations Framework Convention on Climate Change.

He added that, “In view of the multiple initiatives and the need to raise the prominence and relevance of displacement induced by climate change, it will be prudent to rally efforts towards an International Platform for Climate Change Displacement under the United Nations Framework on Climate Change and the Paris Agreement.”

The Minister for Foreign Affairs and External Trade said in Solomon Islands, the National Climate Change policy identified relocation or displacement of people by climate change as a priority and this has been reiterated in the current Democratic Coalition for Change Government policy as well as the new National Development Strategy for 2016-2035.

He said what is clear to the Solomon Islands Government is that addressing displacement by climate change is not simple.

“We understand that addressing displacement is a sensitive and delicate issue because it touches on a variety of other contentious issues such as land tenure, physical relocation of people and properties, which also have political, social, economic and cultural consequences and implications for people who will move and those who will receive them. More over, it will also be financially taxing to the national government and the people displaced.”

Minister Tozaka said in noting that Solomon Islands is least responsible for climate change, the Solomon Islands Government calls on major emitters to make ‘deep cuts in their emissions and avail dedicated financial and technical support to address the needs of people displaced by climate change apart from just offering them protection.