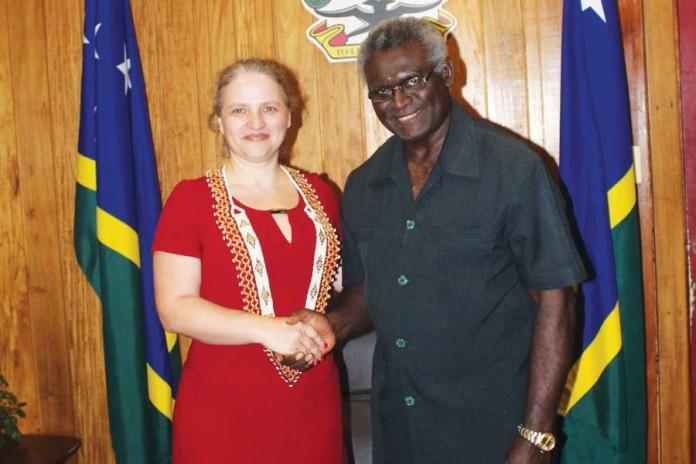 Israel’s Special Envoy to the Pacific Islands, Her Excellency (HE) Simona Halperin paid a courtesy call to the Prime Minister Manasseh Sogavare this afternoon.

The visit by HE Halperin follows an official request by the Solomon Islands Government to the State of Israel through MASHAV (Israeli agency for International Development Cooperation) for support in the area of fisheries, agriculture and education.

Prime Minister Sogavare further acknowledged HE Halperin’s for visiting Solomon Islands following a request by the Solomon Islands Government for assistance in the areas of fisheries and agricultural and also for availing time during the visit to call on him.

He also extended the well wishes of the Government and people of Solomon Islands to HE Halperin in her new role as Israel’s Special Envoy to the Pacific and wished her and family an enjoyable time during her tenure in office.

The Prime Minister assured her that the Solomon Islands Government will support her during her mission.

Also discussed during the meeting was the need for both countries to continue dialoguing with each other on areas of common interests such as fisheries, agriculture and education.

HE Halperin arrived in Honiara on Monday 29th of February and will depart Solomon Islands on Monday 7th of March.

During her week-long visit, Ms Halperin will also meet with the Minister of Foreign Affairs and External Trade, Hon Milner Tozaka and senior government officials from the Ministry of Agriculture and Livestock and the Ministry of Fisheries and Marine Resources.

HE Halperin was accompanied on her visit to the Prime Minister by the Israeli Honorary Consul to Solomon Islands Mr Leliana Firisua.​